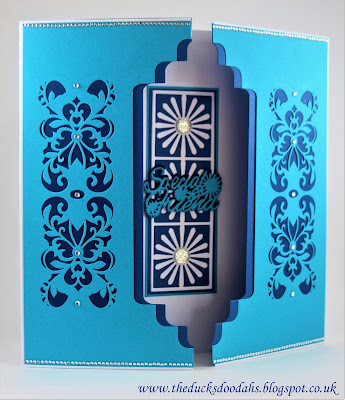 Good morning mon petit poulets. Hope that you are all doing fine.

Had an up and down few weeks but you just have to go with the flow sometimes.
I had a stall at a Craft Fair at the weekend and did very well so that I was a happy ducky. I have started making candles for my stall and they were popular. I was so tempted to make a joke about four candles but thought better of it.

Mr D is on leave this week so we have a few things planned, blood tests for me, MOT at doctors for him, along with the dentist (him)...............the excitement never ends!!!
We do also plan to go to the cinema and for a couple of lunches so its not all NHS related fun.

Now, today's card is a sample from John's Gerbera collection. I know its going to be a Marmite card as it is rather decorative. Its an 8x8. 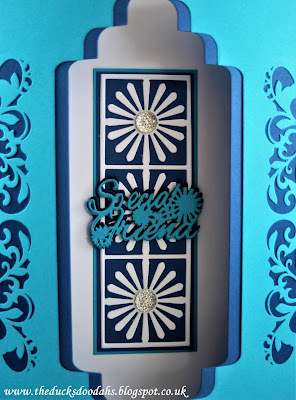 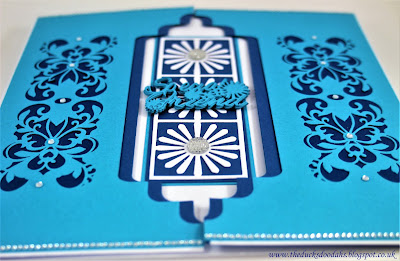 I was looking for something different to do with the scene box die and thought the ends would make a nice edge around an aperture. It was a bit tricksy but I think it looks quite effective.

Well, better shake a leg and get on with my to do list.

Thank you, as always for popping by and your kind comments.

Ps.......I have kindly been invited back to Breedon to teach another workshop on Dec 14th......Please see poster on right hand side. 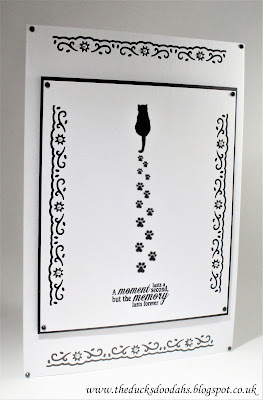 Good morning everyone. Hope you are all fine and dandy.

Please pop over to the challenge blog and have a look at our kitty themed inspiration and why not join in? You know you want to!!!

Now, my card I had made for Nesta when she lost her beloved Rocky a few months ago. I suppose it was the feline version of a sympathy card. 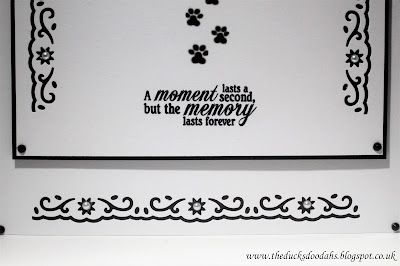 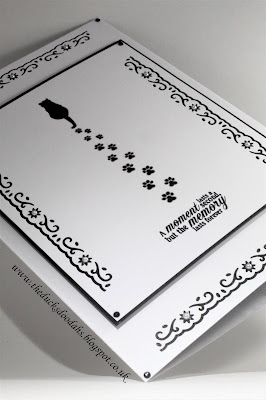 Its been a long time since I had used my punches and had forgotten how useful they can be.

Well that's me for today. Don't forget to pop over to MAWTT.

Email ThisBlogThis!Share to TwitterShare to FacebookShare to Pinterest
Labels: MAWTT 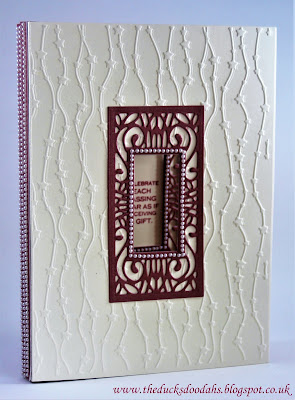 Good morning everyone. Hope all is well with you all.

Welcome to Lozzy T and thank you for clicking "follow". We're a nice bunch on the whole but there are a couple of cheeky ones you need to watch out for.

I am now recovered from my first workshop last Friday. It was a brilliant day and the ladies at Breedon were very gentle with me. They also made some amazing slate and card creations.
Have a look at Facebook to see how they did here and scroll down to 17th November. You don't need to be a member of Facebook or sign up to have a look.
I can't have done that badly as I've been asked back next month, yay!!!
Thank you for your encouraging comments. I think you all had more faith in me than I did lol!!!

Now, back to the matter in hand. Another of the samples from John's scene box shows that I haven't shown. It looks tricksy but you just layer on piece onto another, decreasing downwards. 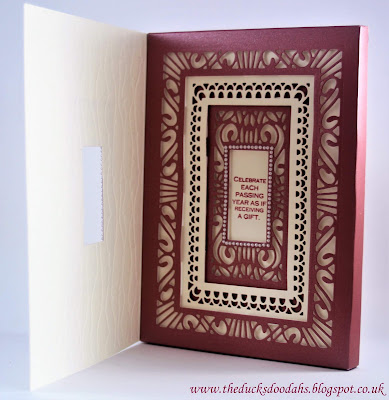 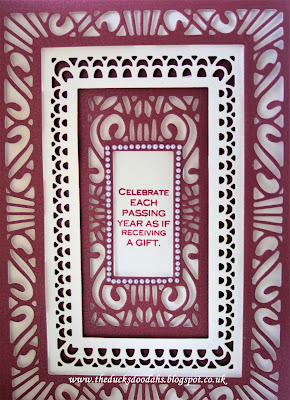 Its a really pretty die set. 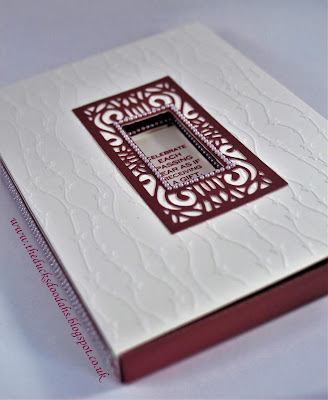 June S, the bowel surgery was on Channel 5. It was all very fascinating.
Myra, sadly the internet outtage in the North East didn't last long.

On that note, I will say au revoir.

Hopefully see you Thursday for my MAWTT DT card. 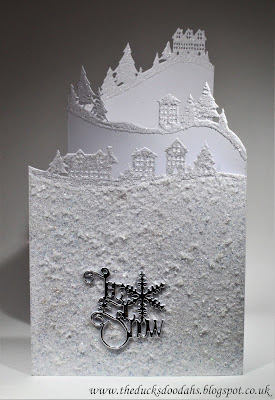 Good morning everyone. Hope this finds you all well.

I am typing this Thursday night to schedule for Friday morning and watching the live bowel surgery at the same time so I apologise for any typing errors if I get distracted.
I did watch the cardiac surgery on Tuesday night, which Mr D thought was a bad idea for someone awaiting a cardiac procedure lol!!!

Thank you for your kind comments about my latest eclipse card. Suzzie, I will construct an eclipse tutorial over the next few days and pop it at the top of the page. Stephanie, I got my large alphabet dies from eBay. They are 5cm in height.

Now, I am back to John's Christmas samples and today's is a tri-fold card using the Snow Scene dies along the edges. 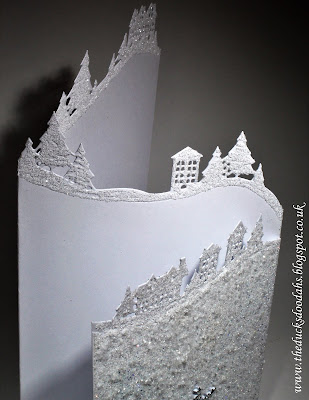 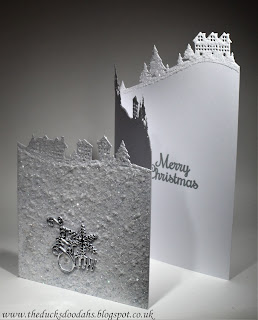 I used all three of the dies in the set descending in a zigzag down the card.
Something a little different.

Maureen, you did make me laugh (for once) with your gagging gag. I'm sure that Myra has tried for some time to gag you lol!!!

Time to sign off now as the operation is getting interesting now and I need to go to bed soon as need a good night sleep to be ready for my first workshop tomorrow,
I have asked the ladies to be gentle with me. Hopefully, I won't disappoint them.

Hope you all have a happy Friday. 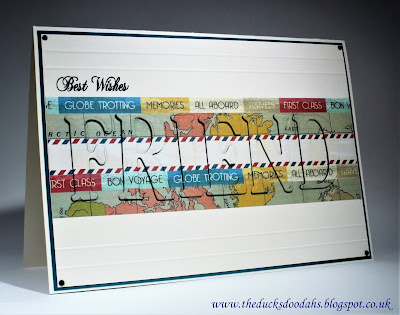 Good morning mon petit fromages. Are you all well?

Had my moments this week but you have to gird your loins (down Maureen !!!) sometimes and soldier on.

Still in the process of sorting out my new craft space. Also had to repair my Grand Calibur as something was rattling inside. It still worked but quite clearly a bolt had come undone.
It was one of the bolts holding the handle assembly so I went to screw it back with an allen key, then realised the end is rounded so the allen key didn't grip.........arrrrrrrrgh!!!
Well, this called for a Heath Robinson moment so I actually used a eraser tipped pencil to replace the bolt and tighten the others as the rubber did grip the bolt.
Mr D was suitably impressed at my ingenuity (its a rare event).

Now, back to the card. I decided that I hadn't shown an eclipse card for at least 5 minutes so here we have another one. Nesta had missed Davey's birthday so thought it was too late, at the point that they were meeting, to give him a birthday card.
I did my good deed and made this for her to give to Davey so that she wouldn't be empty handed when she saw him. 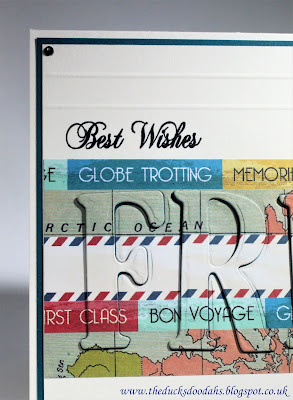 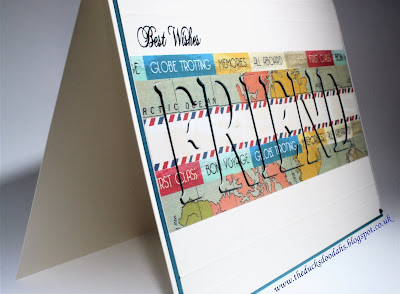 Well, I didn't get to lunch with Mr D after all. He wanted to get some jobs done in the garden so I wasn't going to discourage that. I did meet friends for lunch on Thursday so all was not lost.
The tooth seems to be holding up at the moment but in fairness, I haven't given it anything really hard to gnash on as yet.
Sandy, trust me, I wouldn't want to be biting that area of the dentists anatomy.
Maureen, I was surprised that you still have a need to see a dentist. Mind you, I suppose its easier for him to sand them down and re-varnish them for you.
Karen, my dentist isn't rough, bless him, I just have a very bad gag reflex (again, down Maureen!!!) and so does his assistant, who found out about the ankle stroking when having treatment herself. Having said that, it could have been a ploy by her dentist to sexually harass her lol!!!

On that note, I shall bid you au revoir pour le moment.

Email ThisBlogThis!Share to TwitterShare to FacebookShare to Pinterest
Labels: Eclipse 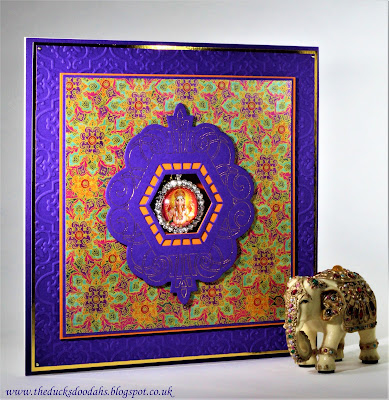 Good morning mon petit champignons. Hope all is good in your part of The Pond.

Thank you for your kind comments on the Mum to Be card. The letters were indeed individual rather than a special die.
Thank you too for your best wishes for my dental visit. As the temporary crown had already fallen out (I crunched on it whilst eating some baked beans) the remainder of the tooth was very sensitive so when he blasted cold air at it, I nearly went through the ceiling.
I had a pact with my dentist when I started seeing him years ago. In the chair, my hand would be at an opportune level with a delicate part of his anatomy, so as long as he didn't hurt me, I wouldn't hurt him.............I nearly acted on it yesterday I can tell you.

I also got a bit nervous when he asked the nurse for the "wide one and the Vaseline".

The tooth is niggling still, even with the crown now on but hopefully, it will settle down.

Now, today is Diwali so I thought that I would show you all the card that I made for Nesta (She doesn't read my blog...calls herself a friend lol!!!) this year. 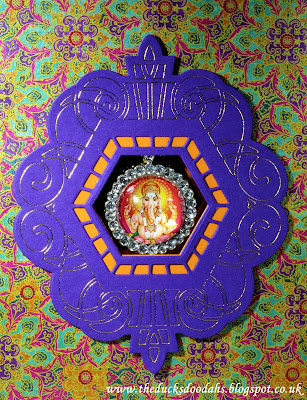 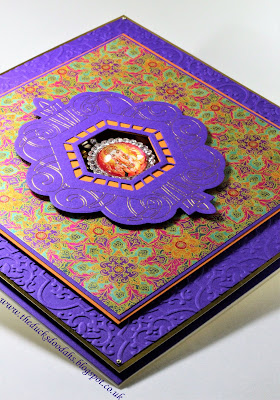 My second foray into foiling and still impressed with the effects.
I thought that the pendant would make a lovely centrepiece and Nesta can remove it if she wants to pop onto a keyring or chain.
The blinged up nelliphant was one of the Diwali gifts for her, though its so cute, I nearly kept it myself lol!!!

Happy Diwali to anyone who is celebrating and happy Wednesday to all. 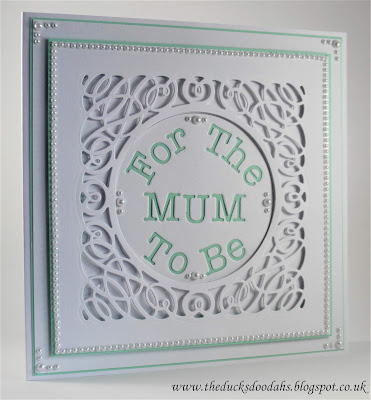 Good morning everyone. Hope this finds you all well.
The thermal leggings and socks are definitely part of the Winter wardrobe here at the moment. As I mentioned last time, this is not public attire as I don't want to scare the neighbours, well, not quite as much as Flash.

Busy week here again at The Pond with shopping, meeting Davey for coffee before he jetted off again to chicago, washing and a visit to the NEC on Thursday.
I enjoyed the show and meeting up with a few friends for coffee and lunch but I didn't buy much at all.
It was quite busy but not nearly as many stall as in bygone days.
Still, it was nice to have a wander around and meet up with chums but I was shattered at the end of the day.

Thank you for your kind comments on my last card. I don't get inky very often but I do enjoy it when I do.

Now, on to today's card. Nesta became a great auntie in August and her niece had her baby shower a couple of months beforehand. I was asked to make a suitable card for the occasion.
I thought something simple but elegant (hopefully) was in order. 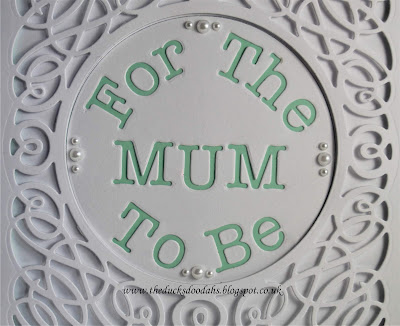 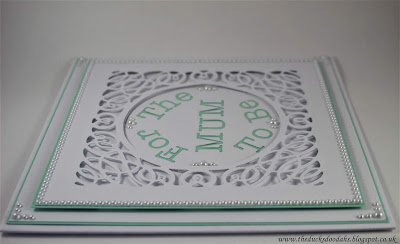 Its an 8x8 card and was apparently well received. She knew it was going to be a boy but I still went with the mint.....just in case.

Well Sandy, what's this about moving North again? Stay in the warm. As Jan said last time, life's too short to be cold lol!!!
Stephanie, hope that you got on ok at the dentist. I'm back on Tuesday for the crown fitting (not a coronation you understand lol!!!).

Anyhoo, I'm scheduling this so better scoot. There have been a few bangs and whizzes tonight but The Girls don't seem to be bothered by it, thankfully.

Have a great Sunday. 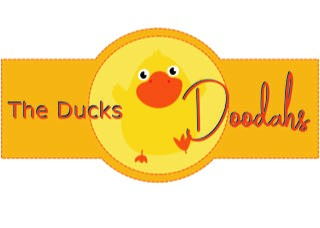